What factors are there that may influence a child being autistic? What might increase or lower the chances that any given child will be diagnosed with autism? These are obviously major questions within the autism stakeholder communities and the autism research community. There have been indications since the 1970’s that the prenatal environment might play a key role in some part of autism. The work of Stella Chess pointed to congenital rubella syndrome as a risk factor for autism. Since then other possible exposures during pregnancy have been identified, including thalidomide, valproic acid and others. But while these exposures point to gestation as the key period for environmental risks, there is no reason to expect that they are an exhaustive list.

The journal Pediatrics released a new autism study today which presents more possible risk factors: Maternal Metabolic Conditions and Risk for Autism and Other Neurodevelopmental Disorders.  The study by authors from the University of California, Davis (including the MIND Institute) and Vanderbilt University. One thing I like about Pediatrics is that they give good lay summaries of the papers they publish, with “what is known on this subject” and “what this study adds”. In this case:

WHAT’S KNOWN ON THIS SUBJECT: Diabetes during pregnancy has been associated with general development impairments in
offspring; however, associations between autism and maternal diabetes have been inconsistent. Few studies have examined
related conditions accompanied by underlying increased insulin resistance and their association with developmental outcomes.

WHAT THIS STUDY ADDS: This population-based study in young children provides evidence that maternal metabolic conditions
are a risk factor for autism, developmental delay without autistic symptoms, and impairments in several domains of development,
particularly expressive language, after adjusting for sociodemographic and other characteristics.

If this sounds somewhat familiar, it’s worth noting that preliminary results from this study were presented at IMFAR last year and this study was highlighted at the press conference.

The CHARGE study draws families locally to the MIND Institute by way of the regional centers, recruitment efforts by MIND personnel (my family was recruited but was just outside the catchment area at 130 miles from MIND). One strength of the CHARGE study is that they don’t rely upon existing records; they test each child (ADOS, ADI-R, Mullen Scales of Early Learning, Vineland, etc.) in-house. Information on metabolic conditions during pregnancy were taken from structured interviews with some cross-checking of medical records to confirm the accuracy of the interviews:

Demographic and medical information was obtained from the CHARGE Environmental Exposure Questionnaire
(EEQ; available for 97.6% of participants), birthﬁles, and medicalrecords (available for 57.7% of participants). The EEQ is a structured telephoneadministered interview with the biological mother and includes questions about demographic characteristics,
maternal medical history, and various environmental exposures. Trained study staff extracted data from medical records

Table 2 from the paper (click to enlarge) shows the odds ratio for autism spectrum disorders (ASD) and other developmental disorders (DD) vs. typically developing (TD) for children born to mothers with diabetes and other maternal metabolic conditions:

As noted above, the odds are about 50% higher (and more, depending on condition) for ASD, and even higher for other developmental disabilities. The authors didn’t stop there. They explored how these maternal metabolic conditions might affect language and other measures of development. Table 3 (click to enlarge) shows comparisons of test scores for children with and without ASD and whose mothers had or did not have diabetes. (MSEL: Mullen Scales of Early Learning. VABS: Vineland Adaptive Behavior Scales) 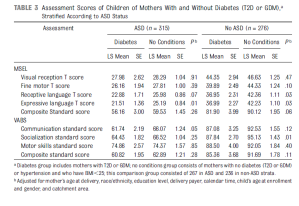 Maternal diabetes may result in lower language scores, for both ASD and non-ASD kids. The authors wrote:

The authors repeated the comparison, but for all metabolic conditions instead of just diabetes. Their Table 4 (click to enlarge) showed that there were no significant differences within the ASD group on maternal metabolic conditions. But for the non-ASD group, on every measure of the Mullens and Vineland tests, children of mothers with metabolic conditions scored lower than children whose parents did not have diabetes, obesity and/or hypertension.

The study was relatively large, with 1004 subjects. Some of the subgroups were small, limiting the power of the study in those areas. These numbers can be found in Table 2. The most common maternal metabolic condition, by far, was obesity. The number of children whose mothers had hypertension were relatively few, leading to large confidence intervals for those odds ratios.

Another limitation is that they rely upon parent-reported medical conditions. The authors address this issue and tie together the conditions studied (diabetes, hypertension and obesity) in this paragraph:

Reliance on self-reported medical conditions was a limitation of this study. However, in the 56% of participants for
whom medical records were available, we found the 2 sources to be in good agreement. Thus, despite this limitation, we can have conﬁdence in our results. Furthermore, although biological measurements (eg, glucose, insulin, lipids, immune biomarkers) before and during pregnancy would have been ideal, we chose conditions (T2D/GDM, hypertension, and obesity) highly indicative of increased insulin resistance as proxy measures of dysregulated metabolism and chronic inﬂammation because we lacked these biological measurements for most of the participants.

Without biological measurements during pregnancy the authors can’t draw specific conclusions about what behind these conditions might raise the risks of autism and developmental disorders. But they do pose some possibilities such as increased levels of glucose, fetal iron deficiency, increased levels of the cytokine interleukin-6 and others.

In the end, the authors conclude rather simply:

The prevalence of obesity and diabetes among US women of childbearing age is 34% and 8.7%, respectively. Our findings raise concerns that these maternal conditions may be associated with neurodevelopmental problems in children and therefore could have serious public health implications.

Until these results are replicated, these maternal metabolic conditions should be considered as strong potential candidates for autism risk factors. As the authors say, “these maternal conditions may be associated with neurodevelopmental problems in children”. But such a conservative conclusion takes nothing away from the potential impact of this study nor the fact that researchers can start to incorporate this new information into their models of autism etiology right away.