A recent study found that eye blinking may be an early cue for autism diagnosis (abstract). The Marcus Autism Center at Emory University, with help from Dr. Warren Jones, the Director of Research at the Marcus Autism Center, and Dr. Sarah Shultz, an Emory graduate student and the first author on the PNAS-published paper, have written a blog post for ASF which summarizes the study’s findings.

One of the central goals in autism research is to better the needs and experiences of individual children on the autism spectrum, even and especially children who may not be able to easily communicate those experiences.  Researchers hope that doing so will provide an inroad into helping those children and also into understanding the condition as a whole.  That goal would initially appear to have very little to do with eye blinking. But researchers at the Marcus Autism Center at Emory University, together with a graduate student in Psychology at Yale University, have discovered a new way to use this information to actually measure how engaged people are with what they’re watching.  And they can even use this technique to learn from children who, like those with autism, have difficulties communicating their interests to others.  The results are reported in the December 12th online Early Edition of the Proceedings of the National Academy of Sciences.

The new method relies on measuring the precise timing of when people blink, and when they don’t.  The research reveals that people unconsciously inhibit their blinking at precise moments.  Why would people blink at some moments but not at others?  “When we blink, we lose visual information,“ says Sarah Shultz, a graduate student in the Psychology Department at Yale University.  “Our eyelids close.  We’re not conscious of the timing of our blinks, but they still impact the visual information we take in.” While measuring what 2-year-olds look at when watching videos of other children playing, Shultz made an interesting observation: she noticed that the children blinked less while the videos were playing than they did before or after the videos.  This led Shultz and her colleagues at the Marcus Autism Center, Ami Klin and Warren Jones, to wonder whether the rate of blinking might go down or up on a moment-to-moment basis, depending on whether viewers perceived a scene to be more or less important. The researchers tested the hypothesis by letting 93 two-year-old children watch a video.  The video showed a simple scene of a boy and girl playing together.  About half the children watching had Autism Spectrum Disorders.  The researchers measured when children blinked and when they didn’t, and the results were surprising.  “Typically-developing 2-year-olds inhibited their blinking at the same moments in the video.  And they were more likely to inhibit their blinking when watching more emotional moments, and when looking at the faces of onscreen characters,” said Shultz.  Toddlers with autism, however, were more likely to inhibit their blinking when looking at physical objects, and at physical objects in motion. Toddlers with autism also inhibited their blinking after actions happened, whereas typically-developing toddlers inhibited their blinking early.  This suggests that typically-developing toddlers were anticipating the unfolding of the social interactions they watched, while toddlers with ASD were reacting, after the fact, to physical actions that had already happened.

“While we knew about young children with autism paying less attention to social cues and information, this is a new insight into understanding what kids engage with and what they perceive to be most important,” said Jones.  “Even if they’re looking at the same thing, different children may perceive it differently.  For a two-year-old with language delays, or even an 8 or 10 year-old who struggles to communicate, this kind of measure can tell us about that child’s experience and, with that information, hopefully improve our efforts to help that child learn.” This method is now being applied to investigate the experiences of other children with ASD.  When children with ASD look at different kinds of visual information, or at faces and eyes and information that might be useful when trying to understand other people’s actions, are children with ASD actually engaged with those stimuli to the same extent as their typical peers?  Do children with ASD perceive those stimuli and their adaptive value in the same way?  Because engagement with socially relevant stimuli may be critical for other aspects of neural and behavioral development—such as the acquisition of speech and language skills, and the specialization of brain function—this is a critical question.  And the timing of when children blink may hold new answers.

Extraordinary Ventures is a North Carolina-based nonprofit that provides employment and social opportunities for people with developmental disabilities. Recently, the Autism Science Foundation ordered holiday oatmeal jars from EV that helped to employ 4 adults with autism over a span of 14 days. We invited Van Hatchell, Director of Marketing and Communications at Extraordinary Ventures, to write a guest post about the important services Extraordinary Ventures contributes to the ASD community.

Ewan, 23, graduated from Chapel Hill High School and immediately faced the daunting task of finding employment in our country’s tough job market. Like all recent grads, Ewan was forced to deal with the uncertainty of employment. But Ewan is no ordinary high school grad. Ewan has Autism.

For 17 year, Ewan benefited from the structure of the special education classrooms of Chapel Hill City School.  Once he graduated, his family realized there was nothing else Ewan was entitled to. He would face the job search like his peers – while bearing the extra burden of his developmental disability.

Ewan volunteered at the University Library, making copies and completing small tasks. His family hoped the library would see the value that Ewan added to their daily work environment and agree to hire him. Months passed with no success.

Then he heard of Extraordinary Ventures, a nonprofit that was exclusively interviewing adults with developmental disabilities. Ewan was hired.

In response to the increasing population of autistic adults, a group of parents in Chapel Hill took charge by taking a non-traditional approach. They set out to start an organization that would start small businesses to employ adults with autism and other developmental disabilities. Extraordinary Ventures was born.

END_OF_DOCUMENT_TOKEN_TO_BE_REPLACED

As part of our Recipe4Hope year-end fundraising campaign we have launched a photo contest on Instagram – the super trendy photo sharing/social media community that is exclusive to Apple mobile products like iPhones, iPads and iPod Touch (sorry to Android, Blackberry and non-smart phone users).  The snow-themed Recipe4Hope campaign stresses that we all need to work together to create an avalanche of autism research.  Our campaign video illustrates this point by showing the beautiful Neiman family, all working together to build a giant snowman;  just as all of us must work together to raise funds to support the scientific studies our family members need and deserve.  The campaign also expresses our thanks and gratitude to our donors, who enable us to do the work we do. We think of them as our angels.

So for this contest, post your own snow angel on Instagram.  The photo can show you, your kids, your friends—a family of angels. Be creative!  You don’t even need to be in the snow – make a great sand, grass, toy, dirt or leaf angel. Whatever it is we just want to see you spread your wings!

Sponsor Postalpix is an iPhone app that lets you order prints of your iPhone photos. Their prints and aluminum panels come in square sizes that are perfect for IG pics. Our thanks to PostalPix for sponsoring this contest!

We can’t wait to see your snow angel pictures! Get a sneak peek of the entries here.

Today we are kicking off our month-long fundraising campaign “Recipe4Hope” – www.recipe4hope.org.  Every dollar donated to the campaign will go directly to fund pre- and post-doctoral autism research fellowships to expand our understanding about what causes autism and to develop better treatments.

ASF has funded just under half a million dollars in pre- and post-doctoral student research in the past two years. Ongoing donor support for this program through the Recipe4Hope campaign is critical. The pre- and post-doctoral fellowships encourage the brightest young scientists to devote their careers to autism research. These research grants are already having a real impact on the field and we need your support to continue these discoveries.

We all know that autism research takes a lot of people, working together, to find the answers. We need the discoveries of the brightest scientists. We need the knowledge and experience of parents. We need donations to fund this critical research.  All these efforts snowball into lasting hope for children, teens and adults. You can be part of this avalanche of funding by making a donation to this special campaign.

After the shoot, we talked to Laura Neiman about why she volunteered for this project. “I’m so thankful that my family was a part of this video,” she said. “I hope that our participation will inspire others to give to this worthy cause.

This fundraising campaign will take place exclusively online through December 31 and there are lots of ways to get involved beyond making a donation. You can help spread the hope by posting information about the campaign on your Facebook page or even sending us photos of your family making snow angels or having fun together at other outdoor activities. Check out this great list of ways to get involved in this campaign – Spread Hope.

As a special bonus, anyone who donates $100 or more will receive a cozy fleece ASF scarf (as seen on our adorable snowman). It’s our way of sharing the warmth.

You can also create your own fundraising page to raise money for autism research this holiday season.  It’s easy and free to set-up a personal page. Click here to set up a page – if you get stuck or have questions email us at dcrawford@autismsciencefoundation.org.

From the ASF Team to you – happy holidays! Thank you for your ongoing support. Together we can build a lasting Recipe4Hope! 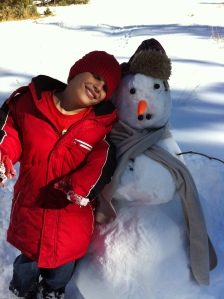